Here's the video for Hanson's new single "Get The Girl Back."

Get More:
Hanson, Get The Girl Back, Music, More Music Videos

- Sacrifices & perks of fame
- A paparazzi hit her in the face and left her with a bruise.... what
- Bradley Cooper is going to clean toilets at the Lawrence's summer camp
- She still hasn't made a big splurge, gets a free car
- Her dad still picks up the tab when she's at home

Zach Galifianakis sits down with Jennifer Lawrence, Naomi Watts, Christoph Waltz, Anne Hathaway, and Amy Adams who are getting all the buzz during this Oscar season.

Zach Galifianakis sits down with Jennifer Lawrence, Naomi Watts, Christoph Waltz, Anne Hathaway, and Amy Adams who are getting all the buzz during this Oscar season.

Stevie Nicks, Lindsey Buckingham, and Mick Fleetwood sat down for a series of video interviews early in the week to promote their upcoming US tour which starts April 4th.

- what songs they will play on tour
- Mick wants to see Stevie & Lindsey do something "out there" that shows their chemistry
- Lindsey talks about Stevie, how they are still discovering things about each other and are now finally starting to address the love that has always been there 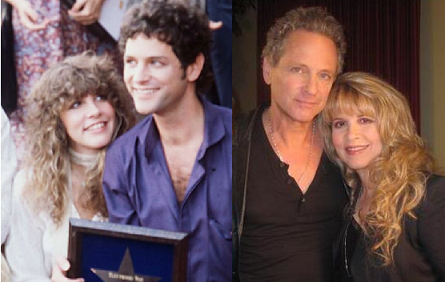 The friction between Stevie Nicks and Lindsey Buckingham that went public with 1977's Rumours has yet to cool.

"We are a cast of characters who never really belonged in the same band in the first place," says Buckingham, 63. "But the synergy works, and I'm looking forward to seeing where the mines lie in the field this time. It wouldn't be a band without that tension. All the same things kick in. I know what I'm supposed to do. I know whose face to get in to make things happen. All those roles are so familiar. I'm ready to pick up the dice and roll again."

Nicks and Buckingham are considering a 40th anniversary reissue of their storied Buckingham Nicks album next year, with a newly unearthed, previously unreleased track from the sessions.

Buckingham's one-man-show solo tour was a confidence booster that improved his singing, he says. He's aware Nicks is returning with greater spunk after her solo winning streak, which could set the stage for a clash. Her recent solo outing "renewed Stevie's spirit," he says. "I'm happy she had a couple of great years. If it means a more complex political landscape, so be it." Buckingham's solo foray "has been good for him," says Nicks, 64. "Playing (one-man shows) can't help but give you a certain compassionate softness. It's very different from Fleetwood Mac."

Nicks is eager to return to Mac and determined to establish harmony. "I'm going to be very clear about what I want," she says. "What I want is for this band to get along and have a great time. So I'm demanding that. We are going to have a great collaborative working relationship. We're always great on stage. I don't say that from a conceited place. We've been playing since 1975. We know what we're doing up there."

Buckingham can't argue with that.

"The important thing is for us not to let the politics or landmines get in the way of us having a good time, especially for Stevie and me," he says. "There's been a subtext of competition and animosity, which is the flip side of love, for a long time. I think it's driven both of us. Now is an appropriate time for us to acknowledge the context of our relationship and see what's left for us to do. If this is the beginning of the last act, let's wind up in a place that dignifies what we started."( Collapse )

From Florence Welch to Courtney Love, Sheryl Crow to Taylor Swift, there are plenty of artists who owe a debt to Stevie Nicks (63). She began as half of Buckingham Nicks, in partnership with then boyfriend Lindsey Buckingham. They remained artistically though not romantically entwined, joining Fleetwood Mac and helping the group become synonymous with 70s rock. Last month Nicks released her first solo album in a decade, In Your Dreams. The track "Soldier's Angel" offers a clue to how she's spent her time in the interim. It was inspired by regular hospital visits to wounded American veterans of Afghanistan and Iraq, something she's done since 2004, along with raising funds for their rehabilitation. "There's no politics involved," she says. "I'm just visiting kids. I take them presents of iPods loaded up with songs, which breaks the ice. Most of them don't even know who I am, although they do by the time they leave and I've sat and held their hand. I'll keep doing it as long as there is a need."

This is a really interesting article. A lot of that I'd never heard before, in particular, Stevie having a solo record deal in high school.

mle12347
Remember that time…
What is the most embarrassing thing that happened to you as a child? Are you still embarrassed whenever you think about it?
Reply 354
I peed on stage while singing at a talent competition when I was 3. I remember it, but I'm not embarassed by it anymore.. I just laugh. What 3 year old didn't pee themselves? I just happened to do it in front of thousands of people.
Collapse